The Economy of Bribes While Kind of Being a Traitor

Crap! Leaving my Mexican hotel for Tikal, Guatemala, I had realized that once again, Captain Details, had added to his unplanned extensive collection of 2nd and 3rd world hotel keys.

I was heading to Tikal for a little Mayan get away. Tikal is basically the Machu Picchu of Central America. 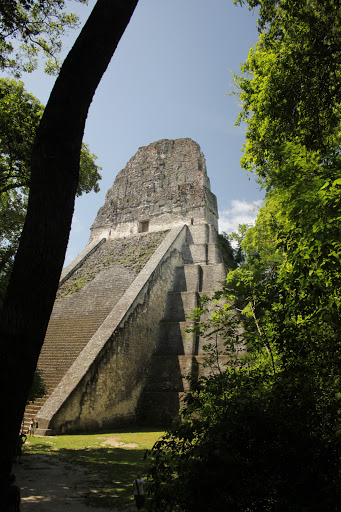 Though, to be completely honest, initially I was hella ho-hum about Tikal. But, then I discovered that a little known movie called Star Wars filmed a scene there. Now, I was on a thirteen hour bus/boat combo to be in the very holy presence of where the revered Sir Hans Solo once stood--the rebel base on the jungle moon of Yavin 4!!

Even after stashing my ever-growing hotel key collection in another passenger's bag, there were immediate problems at at the remote Mexican/Guatemala border crossing.

"$26," demanded the Mexican agent as he seized my passport while somehow not looking up from his lunch.
"Yes, good sir, but as we both know very well, as I have spent less than one week in your fine country, I am unfortunately exempt from your very reasonable fee of $26," I humbly offered.
My Passport was put in a draw as the original financial request was repeated.

"See, I wish not to pay as it would disrespect the upstanding law that exempts me from this fee."
"Okay, okay. $14." The original retail rate was kindly reduced.
"Ah, you see, here on my Yahoo-answers print out. You can clearly read that this is really no need for me to pay this fee in my case."
"$5. That's the best I can do," offered the agent.
"The fact is, professional and just border agent, that I don't have such money."
"There is an ATM back in Palenque," shared the border agent.
"Why, that's two hours in the opposite direction."
"No worries. We will wait. Your passport will be safe with us."
"Well, in that case, I'll just take back my passport and take my chances swimming across the river to Guatemala."
"Sergio!" the agent called in back up.

But, it was true. I really had no money so I made one last very lucrative offer.
"Okay, look. How about this. I promise, during the next World Cup, to generously support and cheer for Mexico."
There was a stunned pause. In surprise, both the supervisor and the agent turned to each other to reflect on this new more valuable offer. There was much emphatic nodding.

They then both fought over themselves for the honor of stamping my passport. They respectfully compromised by putting both of their hands on the border stamp and validated my passport together. My passport was then dusted off and gently placed in my hand. Then, gleeful hand shakes were offered from the border cage.
"Thank you for visiting Mexico. Good day, sir!"