On Being the New Director of an NGO 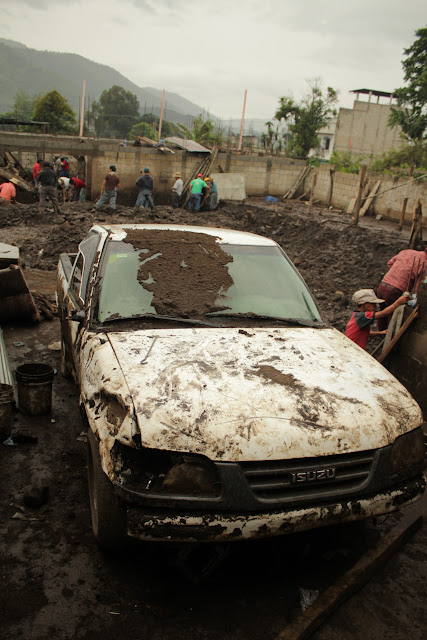 As children in neighboring towns were using dead dogs for soccer balls, my mouth was in Antigua single-handedly making owning an ice cream shop a sudden lucrative business. But, as the newly appointed dictator of my recently chartered NGO, Misanthropes Without Borders, I made the executive decision to put down the cappuccino chocolate-dipped pistachio ice cream waffle cone and get back to volunteering. EducArte was the first organization to snatch up the contract agreeing to my exorbitant fees of 1.3 million pro bono dollars. From there, the process started to run like an underground political liberation group. I was told to wait at an unmarked street corner. No other info.
"Are you Gustavo?"
"Maybe..."
"We have a pickup truck waiting."

I had passed the first level of security. I was walked around a corner where an unlicensed white pickup truck was waiting. The dark purple tinted window of the pickup truck rolled down an inch and I shook the hand that emerged.
"Quick. In the back. Others are waiting."

I threw in my tripod and my camera bag. In the back of the bouncy pickup truck, my initial contact continued to stare at me from her over-sized reflective aviator sunglasses. As she monitored me, I amused myself by lathering on sunblock of 60 SPF--5 SPF points from effectively being tar.

Though I could see that no one was following us, we continued to manically snafu through cobble stone alleys.

We then stopped in front of an ice cream shop. Instinctively, my stomach stretched open and I leaned forward to get out. Senorita Aviators slowly shook her head. I sat back down frustrated with myself that I had just given away one of my weaknesses.
"Hello..."
Where the hell did you come from?
There was now an older gentleman sitting next to me in the back of the truck.
I introduced myself, "Hi, I'm a volunteer."
"Right, I'm a professor."
Of course, the one time in my entire life that I'm not sarcastic.

Almost head-butting me, Professor Sarcasm leaned over and whispered, "We are glad to have you on board."
I pursed my lips and nodded instead of saying anything incriminating in case he had a mic.

Even before we stopped, Senorita Aviators had already leapt from the truck perfectly timing her landing with the exact moment the truck actually came to a stop. With her aviators still pointed at us, she stuck out her arm and knocked three and a half times on a piece of plywood stuffed into a clay wall. It opened. Senorita Aviators discreetly articulated with her head that we should enter.

We were shuffled into a storage shed where behind potato sacks sat a young couple working on an elementary-school-surplus Dell computer.
"Hi. We're from Berlin."
Of course! There's always a couple from Berlin. This group was serious.
"He's our volunteer."
I wondered why no names were being used.
"We should load up the equipment now."
I didn't ask any questions as we loaded heavy crates and ambiguous black trash bags into the back of the truck. We were driving to the front lines. I was being given a personal escort to the epicenter of a recent catastrophic mudslide outside of Antigua, Guatemala. 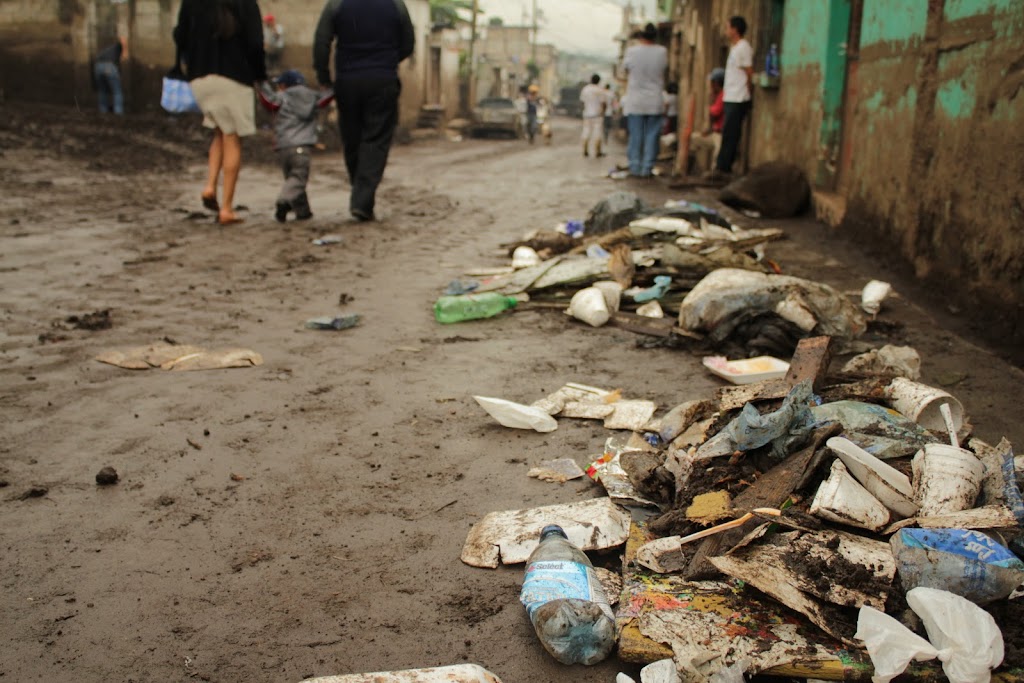 We drove up to the police lines. Senorita Aviators nodded to the security guards in aviators. They nodded back. The police line was lifted and we drove through. While facing us, Senorita Aviator reached back and tapped the truck cab one time with one finger and the truck stopped.
Professor Sarcasm confessed, "We don't have much time. Follow me."

Professor Sarcasm and I jumped out as the truck drove on with Senorita Aviator still staring back at us leaving me to wonder if she hadn't sustained a recent neck injury that minimized her neck mobility.

"In here..."
Professor Sarcasm and I ducked down into a muddy ally way. Okay, to save me time just add the word 'muddy' before every noun I use here. See, a recent catastrophic mudslide had slammed into everything. Though, staring down at the corrugated sheet metal at my feet, I didn't really see what the big deal was. Well, until I realized that the corrugated sheet metal was a roof and basically the whole town was underneath me buried in wet mud. Then I noticed more from the flat nondescript mud lot. I noticed stiff dog legs sticking up from piles of mud. I saw antennas from houses cornering up from the surface. The complete houses I did see had mud oozing from the top windows. 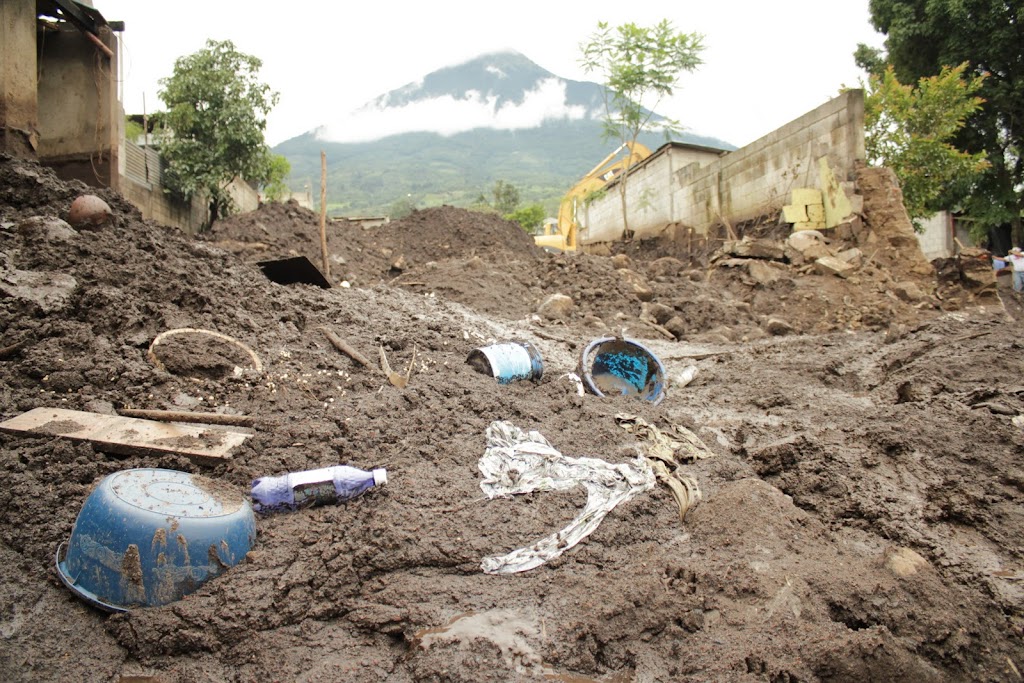 "There! Take a picture there!"
Professor Sarcasm was helping me figure out what was disastrous in this disaster. I saw people using whatever they could to move the hopeless tons of mud. I saw people using their hands, soggy pieces of cardboard and coveted shovels. 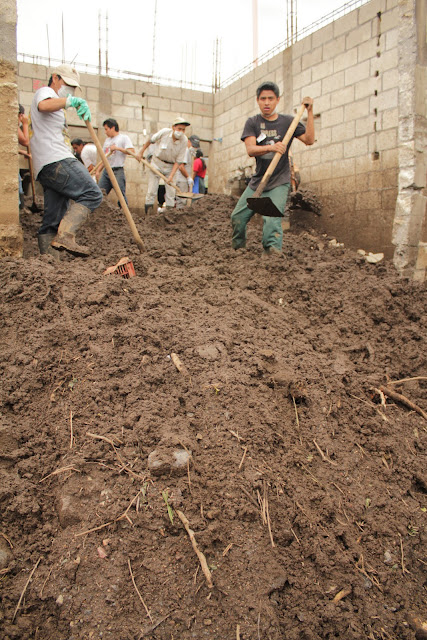 "And look here!"
After a week, some houses had been cleared. You could see by the unwashed walls how high the mud tide had reached. 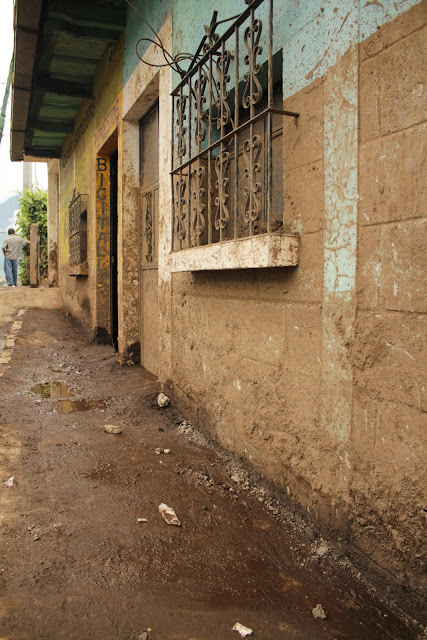 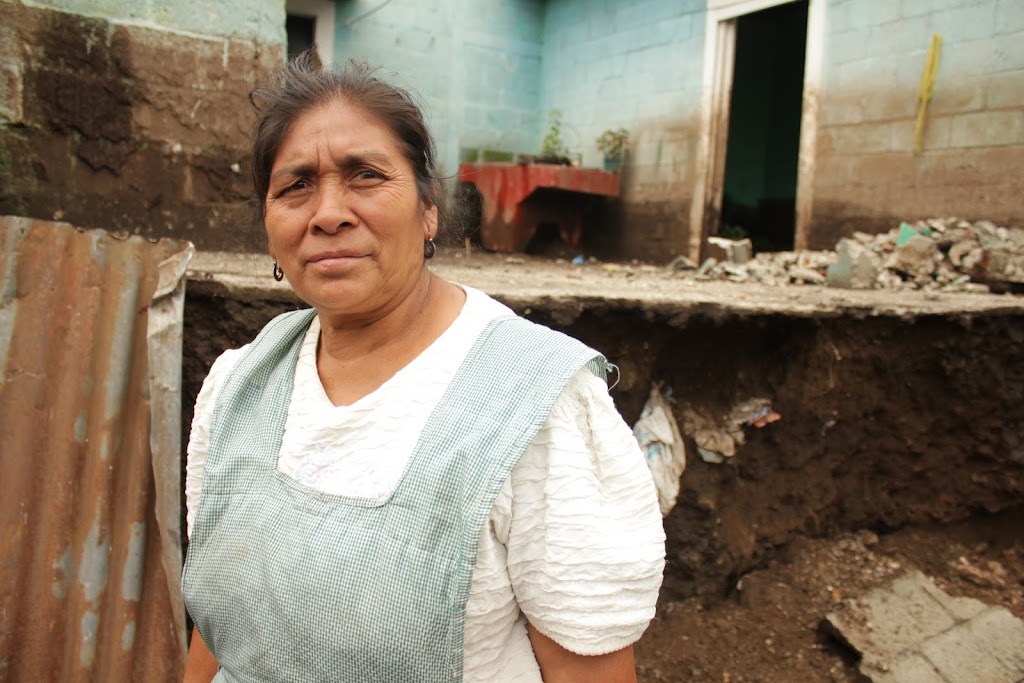 It all seemed hopeless to me. It seemed more logical to just secede to the mud--to just move on, start over and build a new town. It was like watching someone mining with a toothpick. But, there they were. Impoverished farmers from the entire region grabbing a shovel without asking and, shoulder to shoulder, moving mega tons of mud one tiny shovel at a time. Unfazed, they hadn't stopped for a week. My camera felt embarrassing.

"And now this way...pictures of the kids..."
Professor Sarcasm handed off a jug of water and rushed me back to the town square. The crew from the truck had set out to help the now homeless kids. Even for just an hour, this organization had set up the most make shift art and book center for these stranded kids. With just some basic books, paper, balls and hula hoops, they had set up an engrossing kid zone in the middle of this disaster. 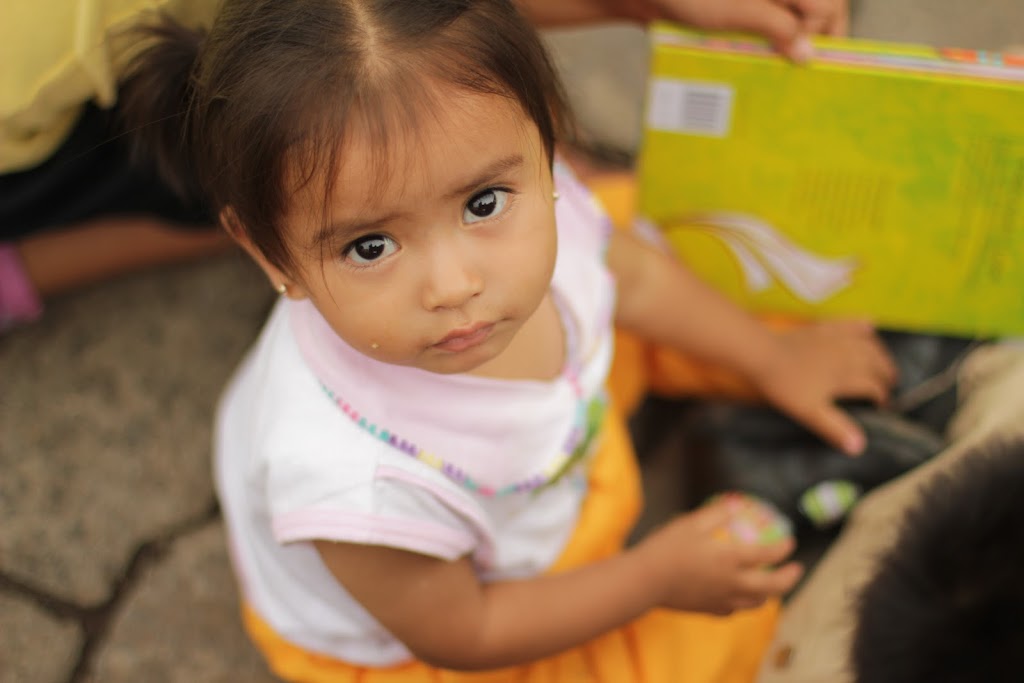 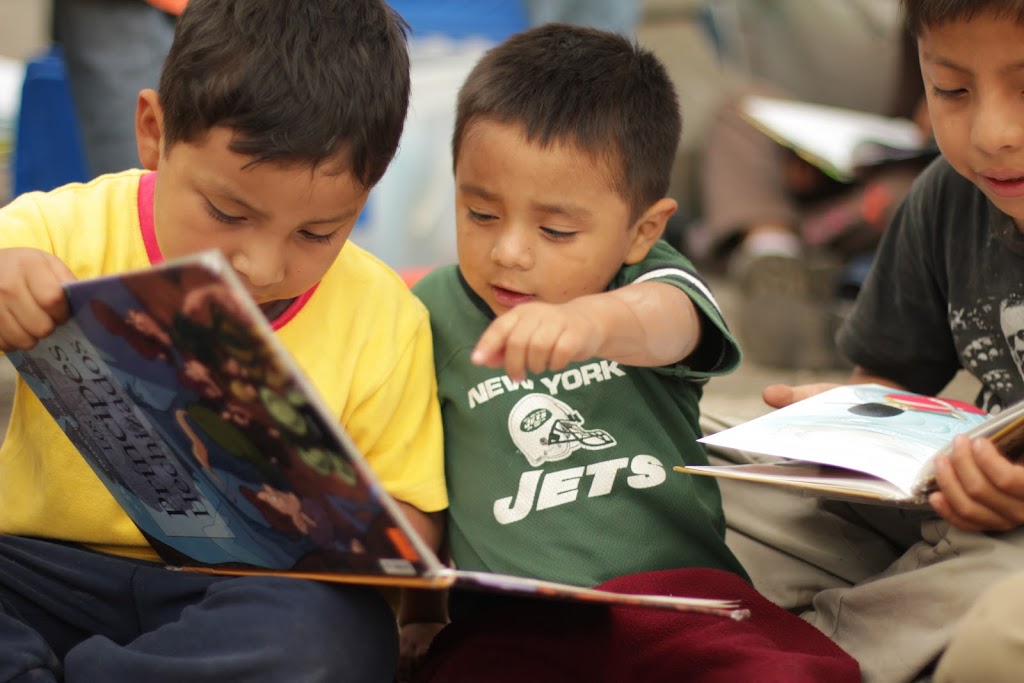 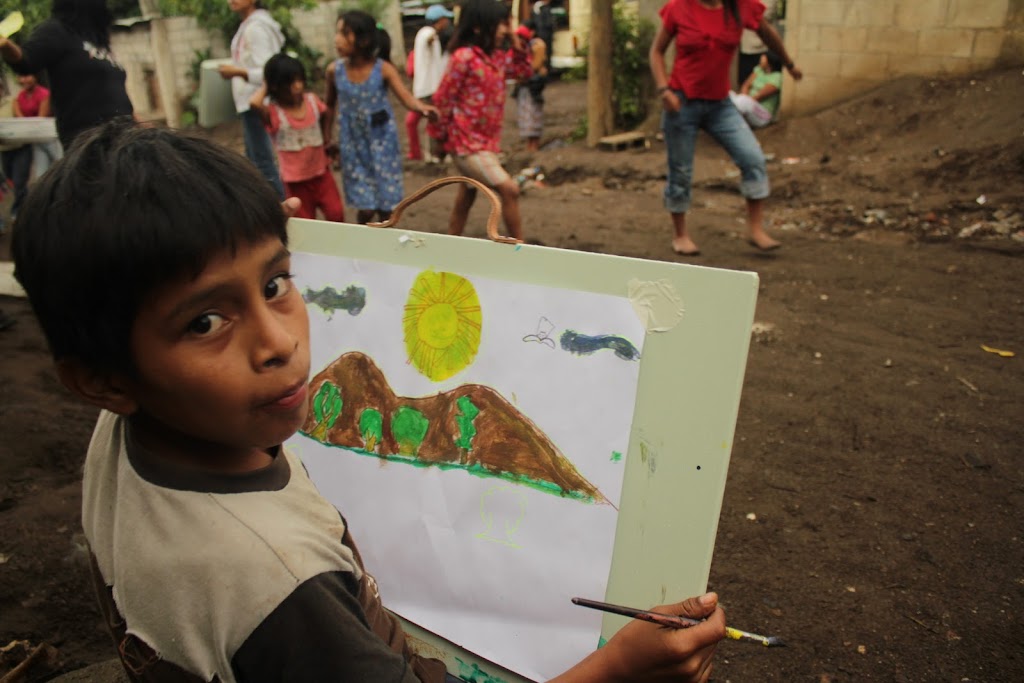 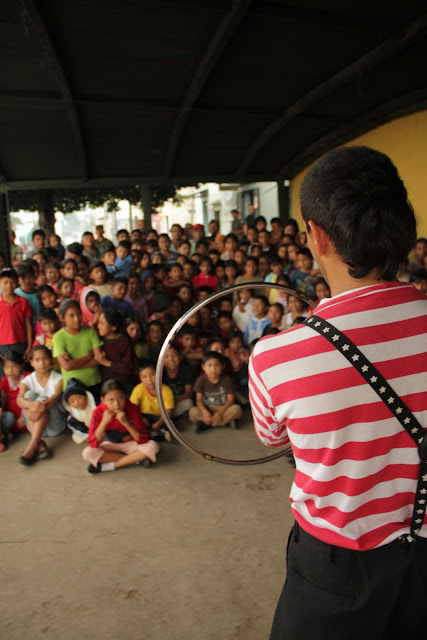 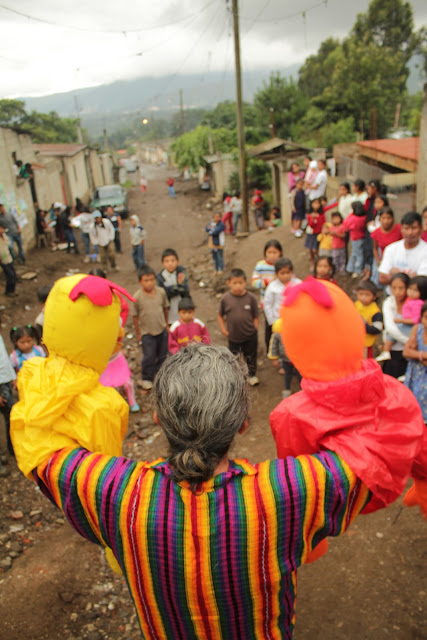 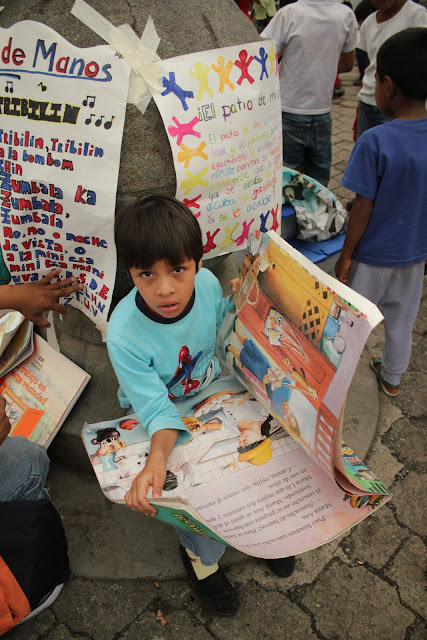 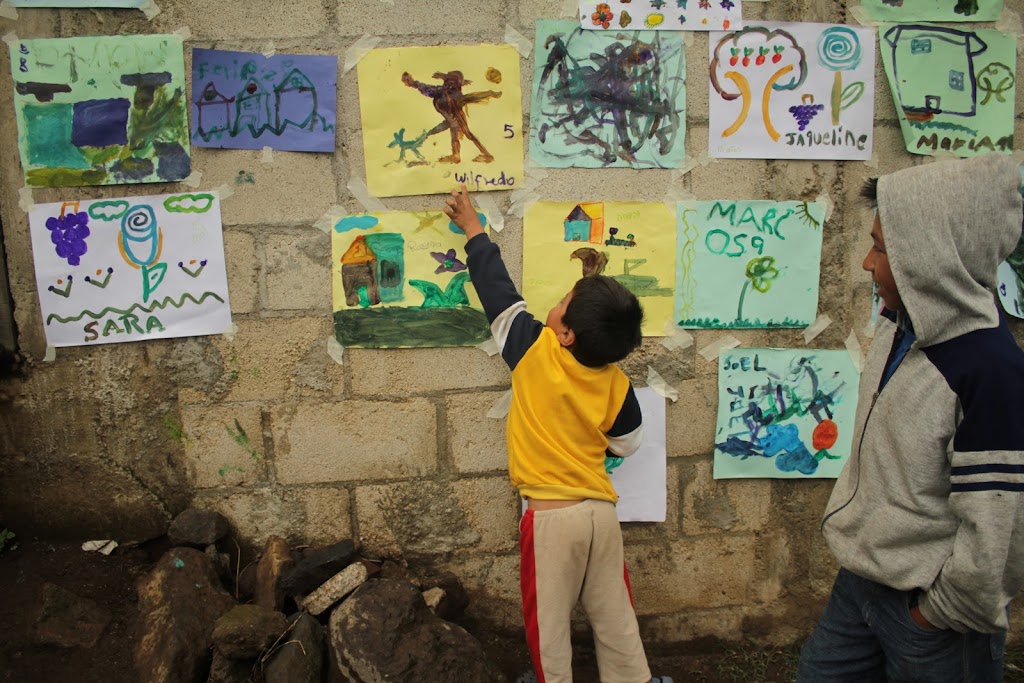 Even for just that afternoon, the kids could look at books, art, clowns, puppets and effectively turn their eyes away from all the destruction. I had to remind myself that I wasn't a douchebag with a camera. I had to remind myself that this was how I was asked to help. I saw that with some paper and a scrap piece of carpet, this group had created an art school. With just three balls they had created a magical circus. And, with some donated books they had created an enriching library. 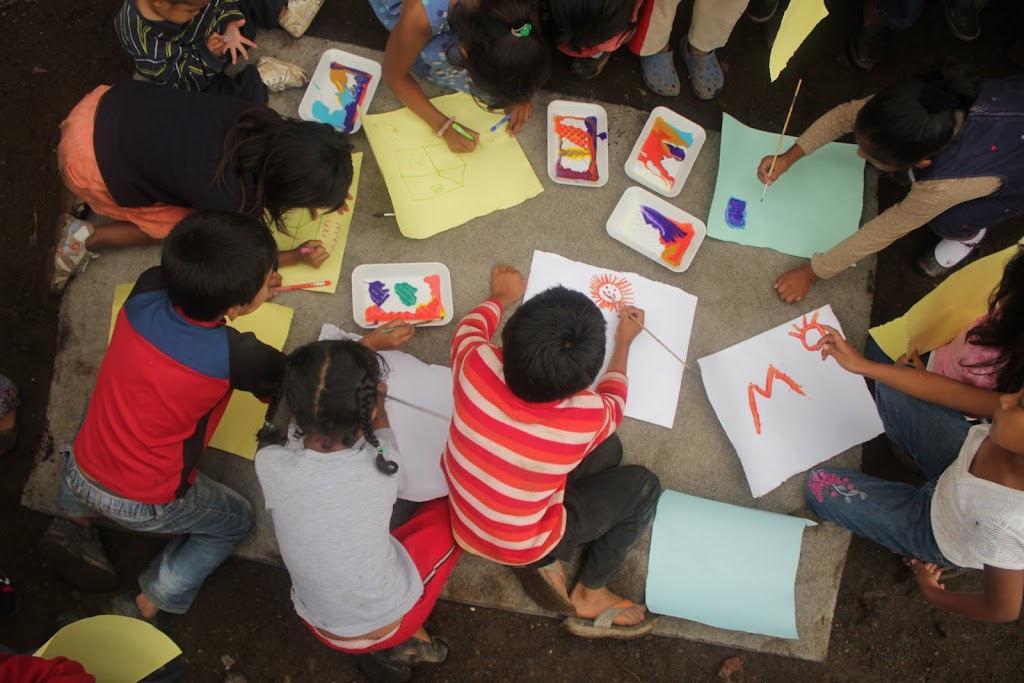 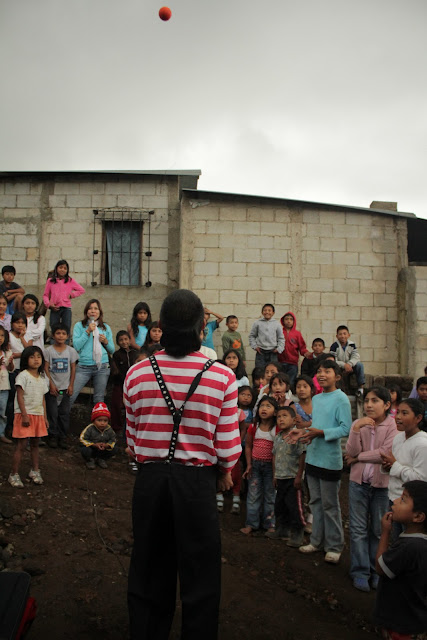 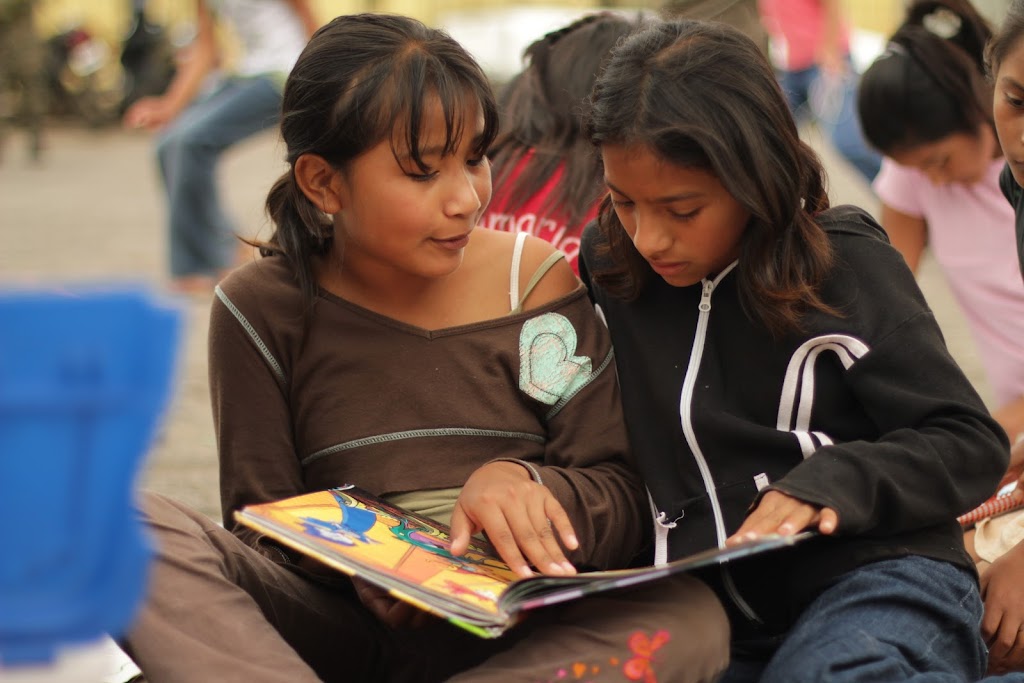 I was so impressed with what this group was doing with so little. The impact was impossible to ignore and I was beaming with, uh oh, happiness. In the food camp, with glee I gulped down the soup made from the rain gutter run off. I giggled when, in the commotion, I was left behind and had to hitch a ride with a clown. And, I was still giddy the next day when Senorita Aviators sent me a directive via text message:
2pm. Corner of 2a Calle. Have the picture data disc.

Because I couldn't wait, I was an hour early. And, as I was so proud to contribute in anyway, I failed to compliment Senorita Aviators on her security bike with its pink banana seat before she efficiently peddled away with the pictures. 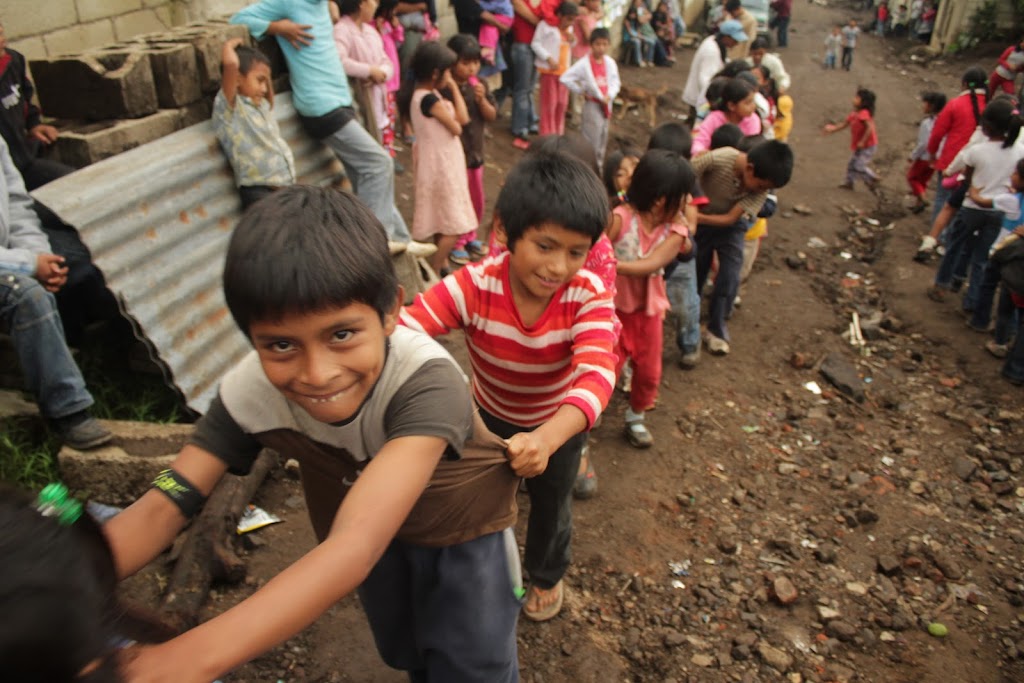